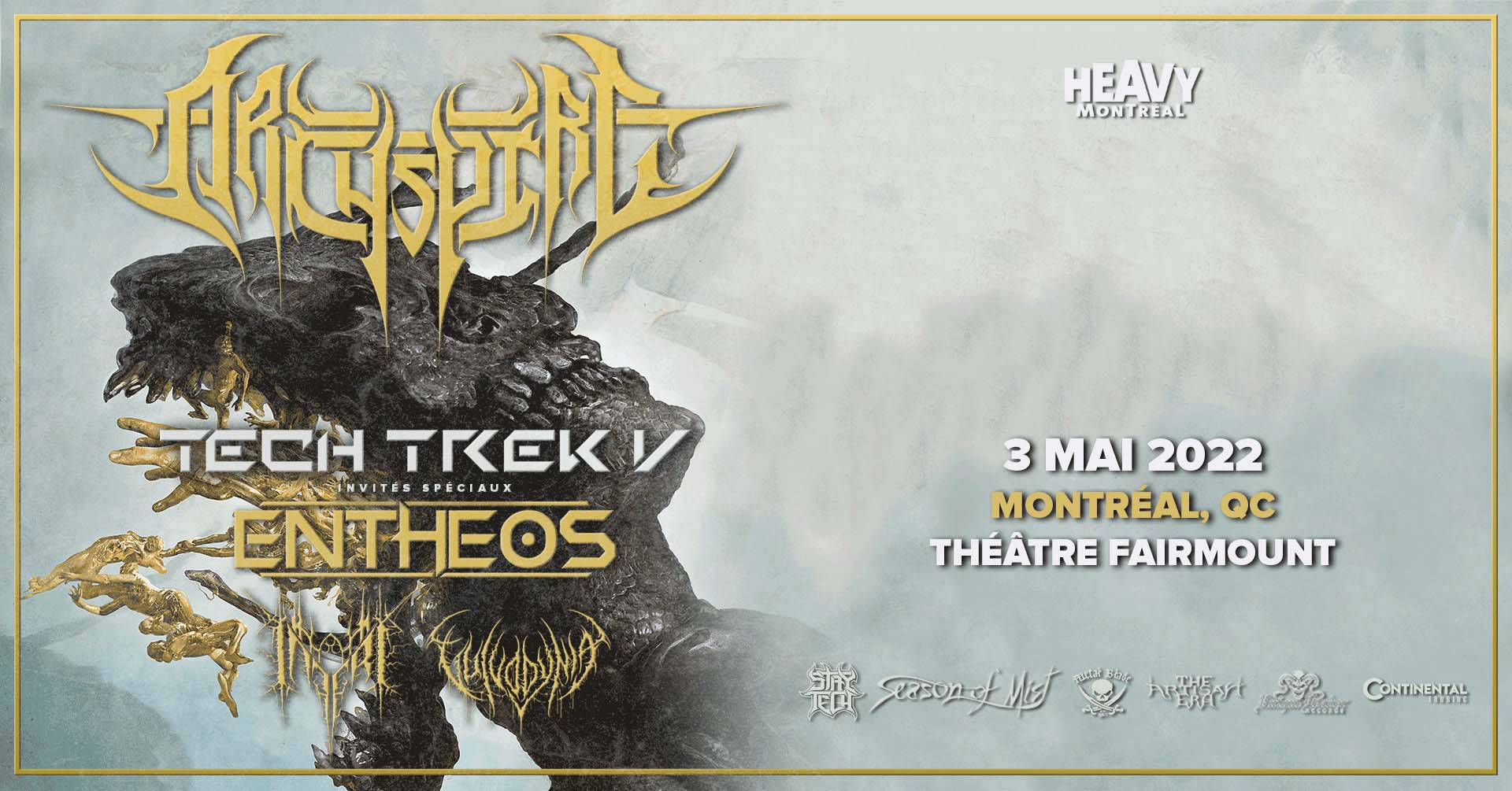 The Tech Trek Tour V, organized by Evenko and Greenland Productions, came to Montreal on may 3rd 2022, with Archspire as the headliner, accompanied by Entheos, Inferi and Vulvodynia. I attended the show at Théâtre Fairmount (huge thanks to Evenko for the media access!) and here is my review of the concert.

Vulvodynia opened the show with their very heavy and aggressive slam death metal. They are a south-african band with a lot of groove and a badass attitude which inspires a party vibe with their thick riffs. It’s the type of music that gives you the stank face right at the first riff and pretty much during all the song. They have a very massive sound, and right when I was thinking to myself « The low end is very satisfying » a second bassist came on stage (Andrew Kim from Inferi) to perform their song Psychosadistic Design, with them so TWO basses simultaneously, and also Claine Salter (Archspire’s Dean Lamb’s wife) joined the party playing guitar. They energy went up a notch at the party was at its peak. 2 basses, 3 guitars, and a very hyped crowd. This band has a very good stage presence and they are tight in their playing. Special mention to their bass player who was wearing a one piece suit of Elmo, despite the intense heat in the venue. He was energetic and moved a lot, regardless. Vulvodynia performed an excellent set and warmed up the crowd very well.

Inferi performed the second set of the night. They are from Nashville, Tennessee, and play a very melodic tech death with orchestrations. I am a die-hard fan of this band since I heard their album The Path of Apotheosis, released in 2014. Inferi are very skilled creators of melodies and fast / catchy riffs. Pretty much all their discography sounds grandiose. This band makes me vibe like very few do it. Their frontman, Stevie Boiser (also in Equipoise, Tethys and Ashen Horde), is very energetic, he interacts and connects a lot with his crowd. I was very happy to hear songs from their most recent album Vile Genesis. This band is very talented and I love them to a point where when I see them perform, it makes me emotional. Especially after 2 years without concerts, the sensation of seeing my very favorite band on stage is indescribable! The desire to headbang with them and the crowd was so strong that my neck is still stiff. It’s always a phenomenal experience to see Inferi perform, because they are a legendary band. Thanks Inferi for this incredible show!

It was then the turn of Entheos, a prog metal supergroup with former members of Animosity, Animals as Leaders and The Faceless. Their music is groovy and sometimes have the aggressivity of death metal, with many other nuances. It’s the band of this night which all elements were the most clearly audible. Their frontwoman, Chaney Crabb, delivers an incredible performance. We can feel her energy and intensity in each single word she sings, with a lot of intention. Her vocal range is wide and her energy is powerful. Their drummer, Navene Koperweis (ex-Animals as Leaders) is a ridiculously skilled musician. He is an important and very involved creator in this band, because in addition to playing the drums, he also does synthesizers and writes guitar riffs. For those who know Animals as Leaders, it’s Navene who was the drummer on their second album Weightless, and he also brought an electronica aspect on it. His playing on drums has a lot of nuances, is very precise and heavy, and breathes a lot. I find that it is the ability of Navene to make the music breathes which allows that everything is clearly audible in Entheos. It’s not the type of drummer who will play (at least in the context of Entheos) a very long blast beat, or fill the sound with a lot of cymbals. Unfortunately there was no bass player performing on stage with Entheos, because Evan Brewer only plays bass in studio for the band. I don’t think they do have a live bassist. Their live sound is full, regardless, and sounds well around the low end. I loved Entheos’ set a lot, it was very well executed and everything was clearly comprehensible.

Last but not least, the headliner, Archspire, striked the crowd with their ultra-fast, groovy and surgical precision tech death. At that point of the night, the venue was well packed. These guys are among the top of the leaders in their genre. All the musicians are incredibly talented performers, but those who stand out the most in my opinion, are the vocalist and the drummer. Their vocalist, Oliver, is ridiculously fast in his vocal rhythm. It’s one thing to be able to talk fast, for example like a rapper, but he does it with the guttural voice of death metal, and his pronunciation is very well done for that kind of speed. Same thing for the drummer but to a whole different extent. He’s even more impressive with higher speeds, it’s like he’s an octopus. Rolling kick drums, blast beats and gravity blasts at really fast speeds. This band’s music is vary saturated but also very melodic and enjoyable. The song A.U.M from their most recent album Bleed the Future is particularly impressive. I tried to figure out the BPM (beats per minute)  and it seems like something like 396 BPM. At this point, it’s beyond ridiculous, but in a good sense. Despite the complexity level of their music and the challenge it involves to perform it live, Archspire’s musicians have a very good stage presence, and they know to have fun while performing. This tour is a success in my opinion and all the bands gave an excellent show. They only negative aspect I have to mention is the super intense heat there was in the Théâtre Fairmount. 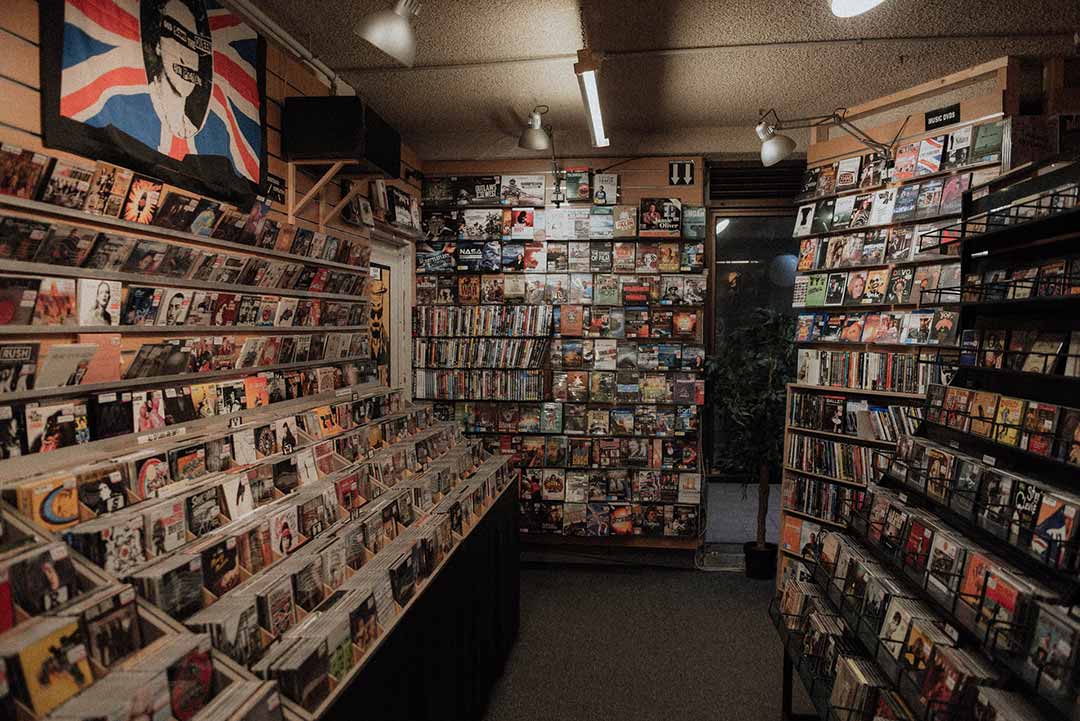 Oceans – We Are Not Okay
https://oceans.bfan.link/we-are-not-okay

As We Suffer – The Fallen Pillars
https://distrokid.com/hyperfollow/aswesuffer/the-fallen-pillars

Nightfall – At Night We Prey
Season of Mist